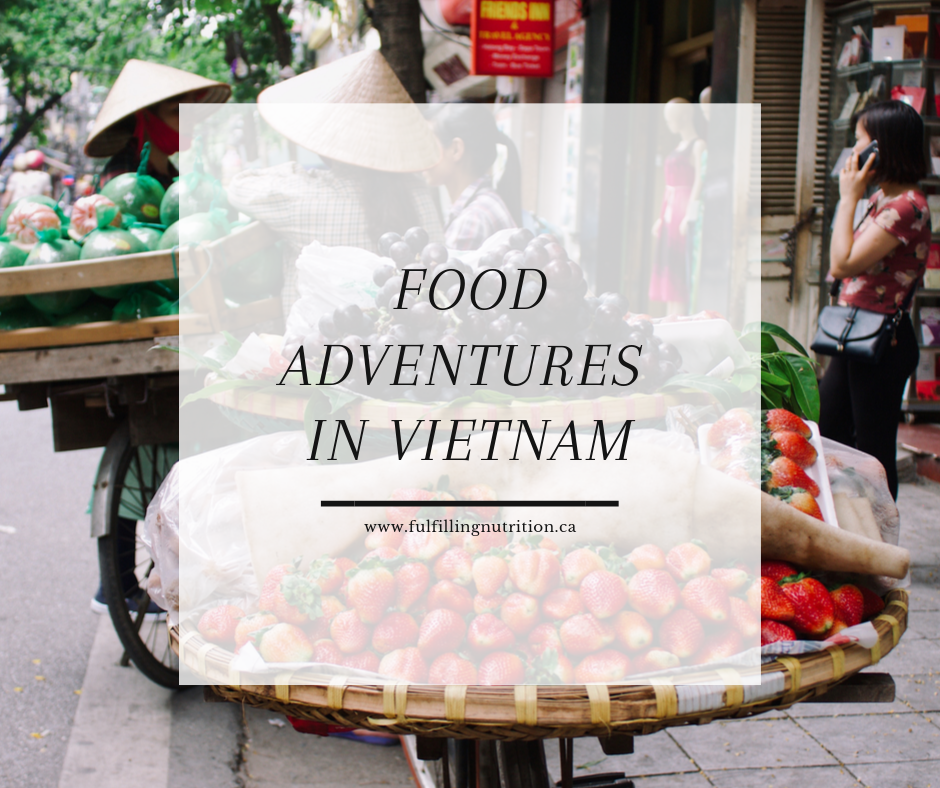 I spent nearly 2 months in Vietnam this past winter, and one of my favourite things about it was the FOOD. When I’m travelling, I love trying out different foods as a way to explore the local culture. I don’t eat meat for ethical reasons, and this was absolutely no problem in Vietnam. The diversity of different vegetarian options was astounding. There were plenty of vegetarian restaurants, and even non-vegetarian restaurants usually had a good variety of veggie dishes. I feel like North Americans kind of label tofu as strictly for vegetarians, and meat eaters stay far away from it. But in Asian cuisines, it seems to be much more embraced – just another food that anyone can enjoy, as opposed to something you would only have to try and substitute for meat. And it is prepared in so many different and delicious ways (although I wasn’t brave enough to try the stinky fermented tofu).

While in Vietnam, we did 2 cooking classes (one in Ho Chi Minh City and one in Hue). In HCMC, we made a green mango salad, a vegetarian version of a crab noodle soup (bun rieu chay), and the most amazing fried spring rolls we’ve ever had!

In Hue, we made a dish of soft tofu topped with a peanut sauce, mushrooms cooked in a clay pot, and braised tofu. After supper, we went with our host family to meditate at a local temple. Not only were the cooking classes a great way to try some delicious new foods, but they were a nice opportunity to get to know some people and learn about their lives and culture.

Our vegan food tour in HCMC involved a number of different stops at restaurants and street stalls. By the end of it, we had tried a bunch of different dishes and were pretty much stuffed!

Overall, meals were a pretty important part of our day, and we spent quite a bit of time planning out our next eating adventures! We used Google maps a lot to find nearby restaurants and read reviews. Here are some photos from some of our meals:

We tried a bunch of different banh mi and they were always good! The ones on the left above were from Banh My Phuong (famously visited by Anthony Bourdain). I had a vegetarian one with tofu, while my partner tried the beef. Other vegetarian variations I tried at other places had egg or fake meat.

Although we did have kitchen access in most of the places we stayed, we didn’t end up cooking a lot in Vietnam. Going out to eat was so cheap and the food was just so delicious. When we did end up cooking, we kept things pretty simple with something like noodles or rice and vegetables.

So what about grocery shopping in Vietnam? The local markets were full of fresh produce, meat, seafood, and pretty much anything else you might need. There were also street vendors selling all kinds of things from the backs of bicycles. Shopping this way can be a bit intimidating because prices are often not posted, so you’ll have to negotiate with the vendors. But the markets have plenty of high quality food for good prices. They are also just a fun experience overall, with all the vibrant hustle and bustle (and scooters whizzing by you in the alleys). So when we felt like having a snack, we would often wander out and find a street vendor selling some tasty fresh fruit like pineapple or mango. And we were rarely disappointed!

We also checked out some supermarkets (which were fairly similar to the ones we’re used to at home), and found that the produce was more expensive and not as fresh as what you could find in the streets. But we were able to find some items in the supermarkets that we couldn’t find elsewhere, like when we really just felt like having a bean salad or some peanut butter. Funnily enough, for something that is so cheap and easy at home, canned beans were pretty hard to find and relatively expensive in Vietnam. Making one of our usual “budget” meals actually cost us more than going out for a really good bowl of noodle soup!

Overall, Vietnam was one of our favourite destinations in terms of the food! The dishes had such balanced and complex flavours, often with lots of fresh herbs and spices. It also wasn’t hard to get plenty of vegetables as they featured prominently on most menus. I had fun trying some foods I’d never had before, or prepared in ways that were new to me. And with our cooking classes we got plenty of inspiration and info to try some of our favourites back at home!